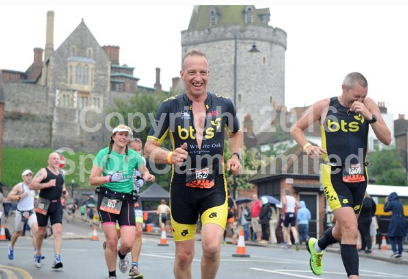 More times than not, Windsor Triathlon seems to take place on the hottest day of the year so far. Not this year….cloudy skies gave way to even cloudier skies, which gave way to downright horrible cold and driving rain. Fortunately, the early start meant that a lot of BTS competitors were already back off the bike and splashing around the town centre.

This year, 5 members also took on the ‘Race with the Stars’ wave. This meant joining British pros and upcoming young athletes, as well as several time winner and London 2012 Olympian, Stuart Hayes.

As ever, a great turn out of both competitors and teammates supporting on the sideline showed BTS off in the best way. Highlights included Age Group wins for Lynda Hart(F4044), Lesley Kernaghan (F6065) and Tom Rylance (M75). BTS also won the Women’s Club Trophy for the highest combined 3 finisher times, with the Men finishing 2nd by mere seconds to Team Dillon.

Full results of all finishers below.