Many results to report on in this week’s round up of events. Done my best to capture most of what went on.

Next up, its the British Sprint Championship near Milton Keynes. This event doubled as a qualifier for the Age Group World Champs in Auckland. Despite thinking he was capable, your website monkey only managed 35th in Age Group!

However, Richard File once again showed he is right up there in the GB 65-69 age group, finishing 2nd to last year’s World Champion. Having already qualified for the Europeans, Richard is now planning to qualify for the Olympic distance event, to ‘avoid Michael Smallwood’. Great work Richard.

Whilst Paul and Richard were enjoying Milton Keynes, Lynda Hart was taking part in the Edinburgh Marathon. A lack of proper liquid nutrition on the course didn’t help, but Lynda still finished in a great 3 hours 48 mins.

Monday 28th was the Nuffield Health Triathlon Challenge at…yes, you guessed it, Dorney Lake!  BTS member in action this time. Guy Grewal completed the 3/4 Distance event (1000m/31.8km/7.5km) in 25th out of 125 overall.

Wednesday saw Joe Middleton have yet another go at the Dorney course with the VOTWO Midweek Sprint (do they do any actual rowing there these days??)  and in his own words ;

did a rather dire 1:09  mainly as a result of an ambled 22 min 5k due to my complete lack of enthusiasm

Joe’s amble round the Sprint Distance course was good enough for 31st out of 200, and 3rd in Category.

Into the weekend, and the start of a very busy one for Julia Hodkinson. No official results up yet, but Julia completed the Hellrider (www.hellrider.co.uk) 8 hour endurance Duathlon (one hell of a brick session). 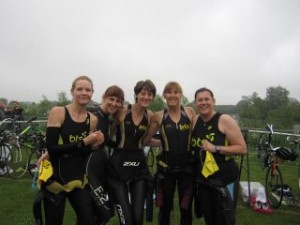 Julia finished as 3rd lady and 39th out of 85th individuals……..before jumping in a car to the Cotswolds to meet 4 other BTS women for the SIS Women Only race there. The group of (from left) Louise, Vicki, Katy, Julia and Janice all completed the Sprint Distance race with Louise coming 3rd overall and winning her age group.

Whilst Julia was riding for 8 hours, Paul, Barbara and Philip Mason joined Jon and Val Williams for the Guildford Aquathlon.

Certainly the longest event of the weekend goes to Andrew Gordon and Kenneth Schweighofer, who both took part in Ironman70.3 Switzerland

Last but not least (phew!) the Masons Senior round off this posting with the grandly named Hawridge International Duathlon. 2.5 mile run, 11 mile bike, 2.5 mile run. Both finished in the top three of their age group, with Paul 7th overall.

Thank You and Good Night!!