Podiums and Qualifications galore in the heat 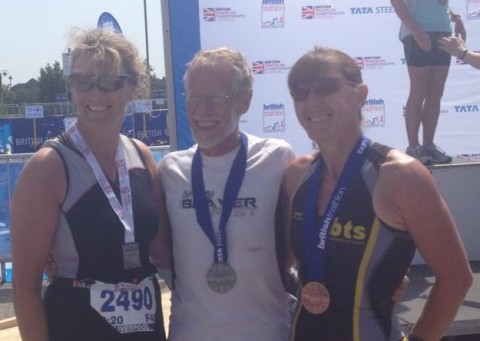 Last weekend was the hottest of the year, but rather than lying around in the sun and just taking it easy, BTS had it’s busiest day of the year so far for competitors.

First up, 4 members headed North to Liverpool for the British National Championships, which was also the final Olympic Distance qualifying event for the Worlds in September. Having already gained qualification at Sprint Distance, Julia Hodkinson went seeking the option to the Olympic, Richard File went to see if he could win the title (he will have qualified ages ago)  and Heather Martin decided to go up there an ‘give it a go’.

As you can see, Richard and Julia not only qualified, but both hit the podium in their respective age groups. Heather was up against a big field of strong competition. With the top 10 women all going under 2.15, qualification was out of reach this time. Who cares, its Canada next year! 🙂

Seems like there were some issues with the timing mats, as a few of Heather splits were missing from the results. Hard luck to Louisa too on not finishing? Mechanical? 🙁

Sweltering in the wide open expanse that is Eton Dorney rowing lake, a few 10s of BTS members turned out in the annual team racing fest that is Human Race Bananaman. There is not much to say other than ‘Damn, it was hot’. Even with sponsored celeb in our fastest team, David Lightbourne, Paul Fitzpatrick and Trystan Lakin could not uphold the fine wins BTS have had in the 800m/31.8km/5.5km (shortened from 7.5km) Team Time Trial event.

However, they were at least joined in the podium places by Team Fat-Burn (Janice, Angela and Lynda) also finishing second in the women’s relay and Team Banoffee Pie (A,B,C) coming in Third.

Finally not content with the shelter of a team on the bike, or just doing one event. Helen Parris took on the Sprint distance course in the midday sun, coming in a fine 2nd place as she keeps training and waiting for the confirmation of her place in London.

A selection of images available below, for all 130+ visit http://www.dropevent.com/Gallery/up421940