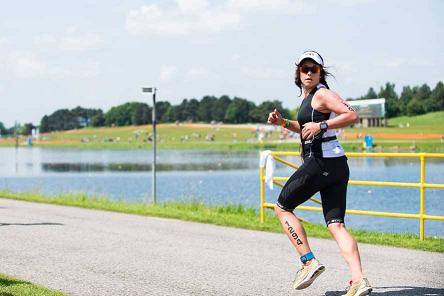 Another bumper month of multi-sport results to tell you about, and that is before we even talk about Windsor Triathlon, to be covered separately.

First up, having already qualified for the World Championships in Edmonton later this year with and Age Group win at Shropshire Tri in May, Louise Croxson kept up her race practice with a trip up to the  Deva Triathlon in Chester on 8th June.

Another woman, new the club, was also providing strong results in June. Kate McNeil, (pictured) who has recently joined BTS has also completed a few Age Group European and World Champ events, but is now concentrating on Middle Distance races. Taking on the Outlaw Half Iron at Nottingham Watersports Centre, Kate pulled out a 3rd place Woman overall  in a race won by Catherine Faux, widely regarded as one of the best AG athletes in the world over the Ironman distance.  Kate finished with splits of  30:21, 2:31:12 and 1:40:34 for a total Half IM time of 4:45:36. Full Results here

Also tackling a Half Iron race in a rowing lake, though on arguably a less interesting bike and run course, Gope Walker ventured down to our favourite local venue  for the EtonMan Triathlon. Riding round and round and round Dorney, Gope finished in 4:52:34, with splits of 38:14, 2h16m, 1h38m for 8th place overall. No photos allowed as he was wearing Hillingdon Tri Club kit. 🙁 Results here

With World and European Age Group qualifying on their mind Paul Fitzpatrick and Ian Lee-Emery travelled up to Rutland Water in England’s  smallest county to talk part in the well known Dambuster triathlon. A gorgeous early sunny morning (blinding swimmers on the way to the first bouy) greeted them as they both took on well over 150 competitors in their Age Group,  with some looking to secure their place in the team for Edmonton in September and Geneva next July.  Both finished with 17th place in their Age Group. Full results here

Certainly the highest calibre event this month (exc. Corinne Abraham’s pro Ironman win) with BTS interest was the European AG Championships, taking place in Kitzbuhl. 3 weeks after her win in Cheshire, Louise Croxon went on a road trip to join 400+ other Brits taking on some of the hills around the ski resort. Looking a lot different with no snow, and in temperatures over 30 degrees, Louise had a good swim and run with the 8th and 12th fastest times  in Age Group respectively. However, a hilly bike caused to Louise to drop down the rankings, finally finishing in 23rd place. Louise’s splits were 22:39, 1:32:56 and 43:40 for a final time 2:44:39 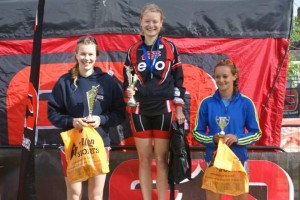 Another busy woman in June was Ellie Quarrington. Racing under University of Birmingham and RAF Tri colours, Ellie squeezed in a trip to Rother Valley for their Sprint event on 15th June and then followed up with the F3 Events Marlow Sprint on the 29th – stealing 2nd place female in the latter event (pictured)