IM Wales… in their own words! 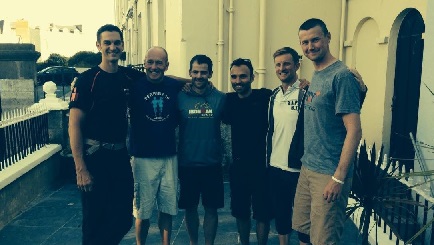 6 members took on IM Wales on Sept 14th, which featured the most difficult ocean swim conditions in the history of the event, followed by over 1k run from beach to top of cliff to transition, a bike course profile that would challenge the best bikers, and a run course that is known for breaking people down.   More than 25% of people that started IM Wales this year did not finish due to the harsh conditions!  But our BTS group had a 100% success rate with some impressive performances being laid out on Sunday, overcoming serious obstacles such as emergency room visits before the race, brutal swim conditions, concussions, flat tyres, broken bodies, pulled muscles and extreme levels of course difficulty.

With so  many taking part, we thought we would let a few of them tell you what happened, in their own words:

MP: With sea conditions less than ideal for the swim it was a slow, hard slog. Exited the swim in a time well down on expectation and jogged the atmospheric route to T1 through Tenby. After the trauma of the swim I got the tea set out in T1 and had a relaxing brew…..still not sure what i did for 20 minutes!!!

EN : I got myself a decent positon for the start 3 rows from the front, the first lap was tough (33 Minutes), the Australian exit tougher and the second lap was murder (36 Minutes), the run along the soft sand of the beach began to make my legs really hurt and the treacherous hill up took even more out of them. It felt good that I’d survived and I was just within my time  target.

AY: Pre-race plan executed perfectly, one of the first people in transition, I minimised faffing and left myself with over an hour to sit and get very nervous about the swim… The walk through Tenby to the start felt like a march to the gallows…

I got cramp in both calves on the first lap of the swim, at which point I assumed a very long day would also be a very painful day. Miraculously, I didn’t suffer any more cramp during or after the race. The whole swim was really tough, comfortably the worst conditions is swum in, but I survived and was somehow bang on my expected pace.

AT: it was the roughest seas swim that Ironman Wales had experienced, T1 was pants (which is not that unusual for me) as putting on compression clothing when wet is nigh on impossible and rather time consuming

MP: Bike course is a very hilly and demanding route, but was mentally and physically prepared for that and had a great ride, meeting some BTS team mates along the way.

EN: The first lap was a ball, the event is worth doing just to experience the crazy crowd on Saundersfoot. 2nd lap,  2 lost bottles of energy drink, the tough swim and slight over exuberance on the hills began to tell, but the support and other competitors kept my spirits up, although seeing people on the lap behind getting pulled off the course was a stark reminder of the challenge of the day.

AY: Bike was fine, highlights were the first climbs up the bigs hills – lots of crowds and felt great. Low point was getting a warning for ‘drafting’; we had just been passed by the leaders and I was side by side with someone having a chat about how fast they were, etc, etc – didn’t really feel I was seeking to gain an advantage!!

AT: I got a puncture (caused by over inflated tires – my fault! I put this down to pre-race nerves), then due to poor inner tube replacement, I did 100 miles with a not fully inflated rear tire (again my fault! I put this down to race stress) and I managed to break my bike bag and had to empty one of my water bottles to carry my spares/tools, then my chain kept coming off! (None of which have happened in training! And yes I had practiced puncture repairs).

MP: Run started surprisingly well on what is again a very hilly route. I was flying until 21k when I got some serious pain in my calf and found the second half of the run exhausting……think that was par for the course though!   Such an amazing feeling to finish and very pleased for all the BTS guys too.

EN: T2 was a lot calmer, and despite a few issues with my newly laced trainers (idiot!) the first lap was ok, a quick shoe change and lap 2  flew by. KM 21 was a struggle and things didn’t get much better until about KM35 as I worried that my training buddies/biggest rivals were gaining my hard fought lead back, but once I had the final, much prized pink and final wristband all the pain melted away, running became easier.   I saw Katie a final time to and headed off down the finishers shoot, waiting and hoping that Martyn would also make his sub 12 hour goal, much relief that he did and then I headed home to try to watch the others finish, and get off my tired feet!

AY: Run was the hardest part. Lap 1 good, lap 2 and I was suffering with major stomach issues and my lights were dimming, lap 3 I was sick and my lights went out entirely (I walked way too much) and lap 4 my energy levels came back enough to get over the line. 14 and a half hours of pain, sickness, loneliness, happiness, fear, pain and more pain. I swore on Sunday night and Monday that I’d never do an ironman again. Not so sure now though…

AT: I’d survived the swim, I did the bike (just – making cut-off time by only 30 mins) and then on the run I  was able to forget about any real time goals, relaxed, enjoyed the race (as much as one can enjoy an Ironman marathon), and made sure I took it all in.  The atmosphere was incredible with thousands of people lining the streets all day – the crowds, volunteers, and other competitors were amazing, so encouraging – random strangers shouting your name urging you on; who got more effervescent the longer the pubs stayed open.  Tenby really knew how to make you feel special, and it felt great to be part of it all. The run was the best part, tough but enjoyable.  Seeing my family, surprising me with custom made Forza Taborelli/BTS t-shirts and a massive banner, and stopping for a quick chat and photos was brilliant and due to their location I would see them twice on each of the 4 laps.  It was also great to see the other BTS support crews at various points screaming words of encouragement.  Very uplifting was seeing the rest of the guys on the run – shouting words of encouragement and the odd bit of abuse (;¬). Best of all though was getting that final pink band and heading to the red carpet.  This is where I was really pleased that I didn’t have to kill myself to hit a specific time – I slowed down (didn’t need much encouragement), made sure I soaked it all, high-fiving, thanking people, stopping for photos, chatting with other competitors – then I arrived, the moment I had been dreaming about, the moment I finally knew I had done it.  Hitting the red carpet, the noise level went up to 11 and a massive smile appeared across my face.  I was blowing kisses to the crowd and then I heard those words … “Andrea…you are an Ironman”….incredibly emotional and unbelievable – I just couldn’t quite believe I’d done it…but I had!  Yes – tears were shed, especially when I saw the family after picking up my medal…I’m from Mediterranean blood, what do you expect? The rest of the day is filled with exhaustion, logistics, catching up with others and hearing their stories and a couple of beers.  Right, I am off to get my tattoo. Roth 2016 anyone?