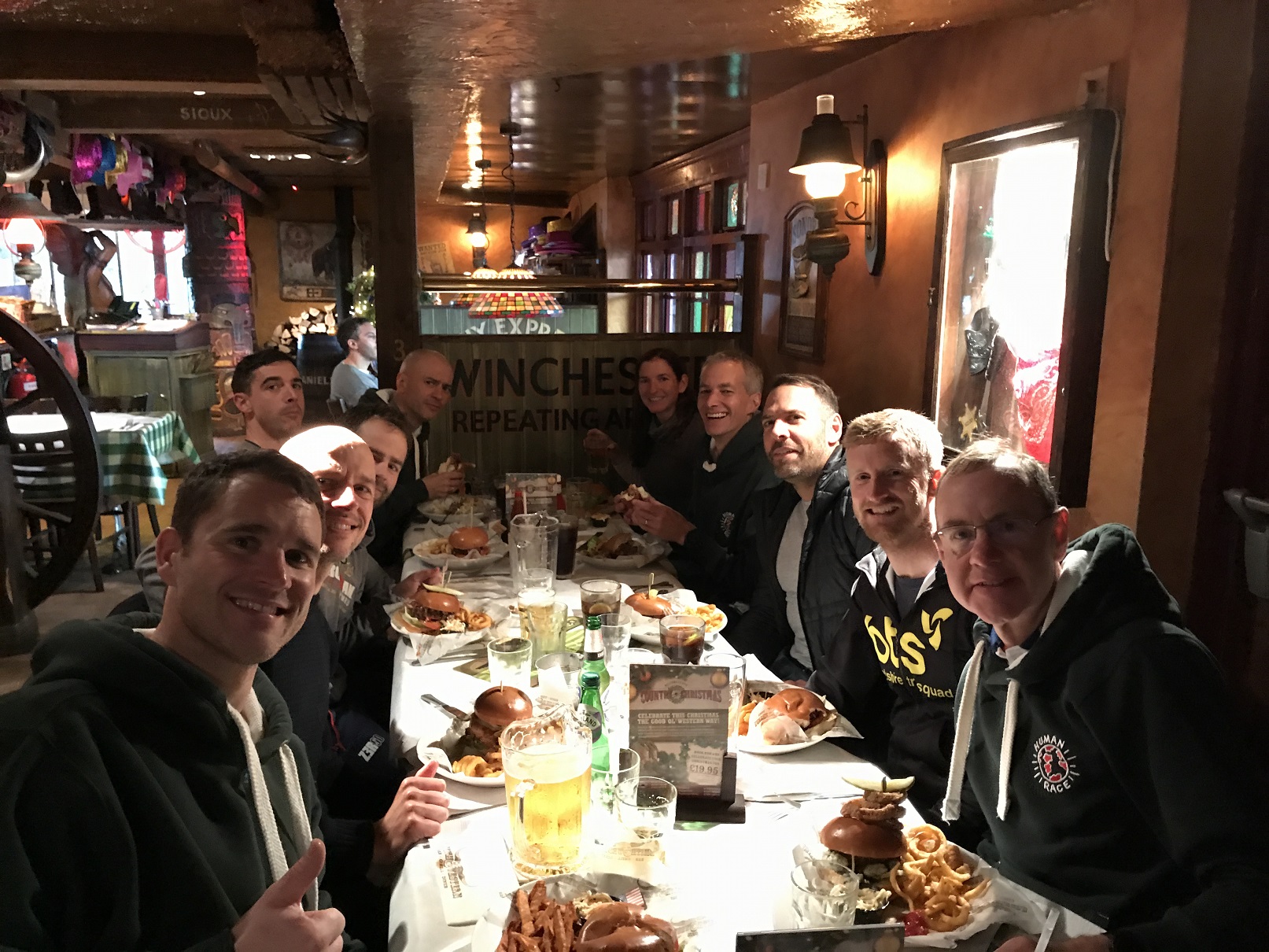 In all 9 BTS members took part in Ballbuster this year. The Duathlon consists of a 8 mile circuit which is run once, cycled 3 times and run a final time, the sting in the tail is that at the end of each circuit you have to climb up Box Hill.  As is now the norm Ed Nunn put together a training plan in the run up to the race which included hill sessions, brick sessions and long distance sessions.  Most of the Ballbuster hopefuls followed the plan with only day jobs and family life getting in the way occasionally.

Unfortunately Paul Fitzpatrick was forced to withdraw with ongoing Plantar Fasciitis so able substitute JC stepped in. Gemma Koff also pulled out with calf and ankle injury. In the taper time before the race various conversations amongst Tri Squad members were more focused on the likely inclement weather than the 40 miles to be undertaken with the 2016 torrential rain and 6 degree temperatures still playing on peoples minds. However in the last few days before the race the forecast got less and less bad. While we were racking and for the start of the race it was still drizzling . There were various different opinions on the amount of clothing required and how much extra clothing to put on in transition for the bike. The majority opted for variations on sleeved tri suits with a base layer.

The start of the race is staggered to ease congestion. Just after 8.00am BTS’ers looking for a good finish time and to see if they could outdo each other queued near the front. JC and Ed started in the group ahead of Chris and Andrea and were soon pulling away. Andy, on the first run leg for the only BTS Relay team soon caught Ed and JC and pushed the pace on. Meanwhile David Dyer was pacing himself nicely in front of  Lynda who started a couple of minutes after him. Both overtook  Andrew Bower who, like Phil Fazackerly was also taking it steady, everyone weary of the long effort ahead.

Coming into transition the weather had definitely improved. Ed made quick time putting on a jacket. Chris arrived a minute ahead of Andrea, decided on no changes in clothing, even forgetting to put gloves on and left ahead of JC. Behind, Andrea had pulled out a few minutes on David.  However David was sticking to his plan of saving his energy for later and took the ascent into T1 easy. As a result Lynda was closing in.

The first lap of the bike course is usually fairly free of other bikes and generally everyone made good progress. The weather held and sun was even seen if only briefly. The technical nature of the course means that tri-bars can only be used for limited periods and needs to be balanced with the penalty of a hill climb.

Half way up Box Hill Chris was convinced his eyesight was fading when he saw what he thought was Ed, by the time they reached the end of the first lap Chris had overtaken Ed and, having saved a bit of energy on the first lap started to put the hammer down but was quickly halted in his tracks by cars waiting to overtake slower cyclists.  At this point Ed was very sure that his choice of bike for the day (cross bike with road tyres) was holding him back and settled for trying to stay ahead of JC.  Meanwhile behind Lynda was giving David a ride for his money, both having overtaken Andrea who was definitely in the zone of “no pain”.

Coming in to T2 Chris was pleasantly surprised to see very few (couple of dozen) bikes already racked. Also just as surprised to see Martyn and Andy have a good old natter as they switched timing chip. Chris and Andy left transition together and ran together until Andy’s shoelace came undone. Andy stopped but caught Chris half way round the lap at the water station just as Chris decided it was time to up the pace. Andy, who was nursing a calf injury, fell back. Chris was now trying to work out whether a sub 3:10  time was on the cards and despite being overtaken by several faster runners was on target for a similar time to the first run, albeit slightly shortened due to the position of the finish tent.

JC and Ed were now engaged in a straight foot race to the end, they swapped positions a couple of times but  Ed won out. Despite being exceedingly close in transition David had saved enough for a truly great last lap posting the second fastest BTS final run lap of the day, and was first 55+ male to boot also making sure he stayed ahead of Lynda, . Lynda’s great bike stint and similar final lap to Andrea meant that she finished well ahead him on her way to (another) Age Group win in an event pretty much made for her!

Andrew had decided that due to his injured shoulder he would not do the second run lap and pulled out.
Phil brought up the rear but nonetheless should be extremely proud of finishing his first Ballbuster. The BTS team retired for the now customary milkshakes, beers and burgers at the Smith and Western on Box hill. Well done all.