Another round up BTS performances, updating on who did what and where and give some context to the Club League that is really starting to kick off now. 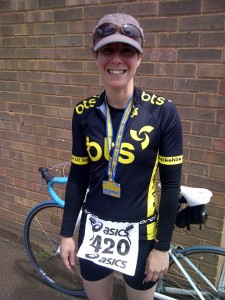 First up, congratulations to Lucinda Lyon, who completed her first ever tri at the Henley Fun2Tri Sprint. Lucinda completed the 400M/20km/5km course around Henley in in 1h 41 mins and is already signed up to Thame triathlon too. ,  splits below.

Ellesmere in Shropshire played host to the TRI UK Shropshire (funny that) Triathlon on Sunday 24th June. Its also played host to one of BTS’ newer members, Peter David, and one of our longest standing, Richard File. Regular readers will know that Richard has a habit of conquering pretty much all that is put in front of him in the M60-65 age group, and this time finished 2nd in Age Group.  Well done to both on what Peter described as a ‘foul, cold, wet, windy day’. We do this for the love of it you know!!

So, to the big local event of the last week, the Marlow Half Ironman – or possibly mudman if the pictures are anything to go by! Those of you that have seen the BTS Club Newsletter will have read some of the adventures of various competitors who took part in a shortened 1500m up and downstream Swim, 90km Bike and 21km Run, but in summary

Katy Walker got her arse in gear after someone casually suggested that she just wasn’t trying hard enough whilst on a beach in Majorca (not sure who that was – ooops) and went on to swim in the lake every chance she had, bought a new bike and ate cheese sandwiches whilst losing 7kg – although not sure where from!

Jo Weatherall had been hoping to do a marathon, got injured, started riding again in a hurry, got punched in the head, put on lots of clothes for the bike and gained 7lbs (in mud) on the run 🙂

Erica Bensley wente from ‘at it’ to ‘measured’ in training – thanks I am guessing to a Mr Mason – fought off illness, slid like a seal, threw up, had a wee and finally crossed the line to the roar of a BTS support group.

Also competing were Chris Harris and James Leeson, times below.

Last in this update, and week later on 1st July, our future female representative at the World Age Group Champs in Auckland this October – Louise Croxson – cemented her place in the team having already qualified at the first attempt a few weeks ago, by winning her age group at the Deva Olympic Triathlon in Chester. More to follow on this, but the way Louise is racing at the moment, there will be very few, if any, ‘un-chicked’ men at the Club Champs in August! Louise was joined by Kate Sandford in Chester, also competing in the F35-39 age group and was neck and neck with Louise at the end of the bike leg.