Four Go Down Under 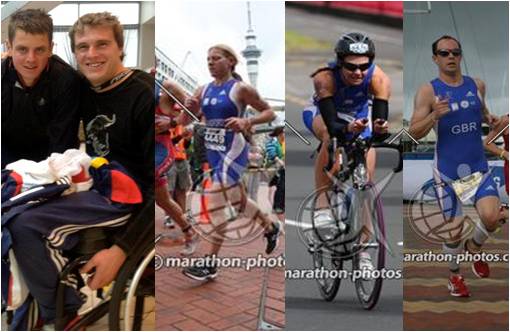 As the season comes to an end and members of the club start giving up on this year, and resolving that ‘next year is the one’, 4 members of BTS kept training hard into October. The reason – they had all, through varying levels of sporting success or luck, managed to qualify for the ITU World Triathlon Championships.

This annual event, added to the Grand Final of the ITU World Series for the Elites, takes place in a different city every time. This year the race was about as far away as it is possible to be, in the New Zealand city of Auckland.  Earning the right to compete for your country is exactly that –  ‘the right to compete’ . After achieving a reasonable position for your Age Group in one of the designated UK based races in the summer, you still have to fund the entry fee, travel, food, spending money, new equipment/kit and anything else yourself.

Paul Fitzpatrick, Kate Sandford, Louise Croxson and one of BTS’ newest members James ‘Jimmy’ Goddard decided that the expenditure was worth it, and set out to see how they could do in the blue and white of a GBR trisuit.

Paul, competing in the Sprint,  finished the choppy sea swim, undulating bike and flat but twisty run in 1:14:04 for a middle of the table 42nd position. This included a half kilometer long transition!

Kate and Louise, both competing in the 35-39 Olympic Distance had to content with a swim that went much further out into open sea from the Auckland water front, with the resulting waves, two laps of the same bike course and a busy run course. Kate finishing in a solid 64th place out of 95 from several different countries.

James was competing in the Para-Tri 1 event, on a course designed for fast racing of handbikes and wheelchairs, which all took place along the Sea front road in Auckland. He again finished comfortably in the mid-field.

Star of the show was Louise. Having won her age group at one of the qualifying events during the summer, Louise was looking for a good finish. whilst she was not completely happy with her 17th position, a top 3 Brit finish means that she will automatically qualify for next year’s World Championships – which just so happen to be in London! 🙂

Well done to all, and hopefully we will see more BTS racing for GB next year!

All results, with splits are below:

← Prev: September Results Round Up Next: Annual Awards Dinner - the Winners are... →