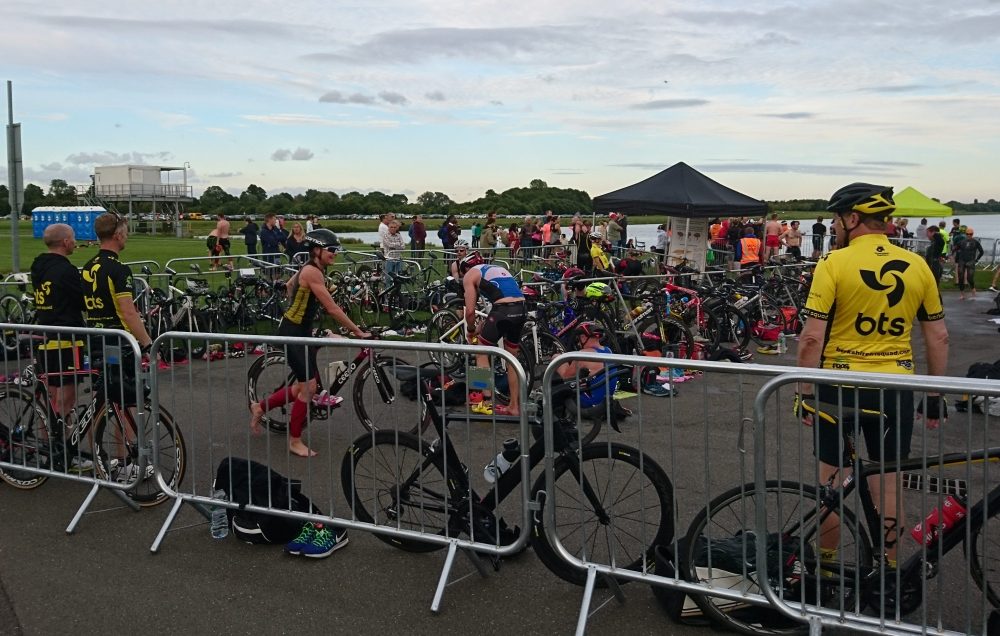 As is the tradition, August (or maybe September) is Club Champs time. Also as normal, thanks to our friends at VoTwo events, BTS was given its own special wave at 7.05pm at their Wednesday evening event. Thankfully, it was once again a gorgeous evening to have a triathlon race, even the infamous Dorney wind was not as bad as usual.

Treading water at the start this time were 19 individual members and 4 relay teams. It was Team De Baylis who led out the swim, thanks to a storming leg from swim coach Christof De Belder with Paul Fitzpatrick drafting him the whole way to come out as first male. Following shortly was defending women’s champion Louise Croxson.

On to the bike and Team De Baylis held on to their lead with Paul having to deal with a hard charging Chris Dollimore. With Chris and Paul arriving into T2 seconds apart, Louise stayed out front on the women’s side but with Kate Robinson closing the gap to only around 15s after a fast bike leg.

Once running, Team De Baylis were represented by super-mom Laura, racing the 5km at ‘some weeks’ pregnant! She was caught just before 1km by Chris, around the same time that Paul arrived at the front of the race too. So started a side by side race that has not happened for several years. Meanwhile, once back on her feet Louise ran away from the women’s field as expected. Kate, coming back from a stress fracture earlier in the season was now keeping her eye on progress of the two runners behind her in the shape of Lynda Hart and Gemma Korff.

With 1.5km to go, Paul was setting about trying to break the link each between himself and Chris, but eventually the lack of running for told and Chris was able to pull away to become the 6th different male winner of the BTS champs in as many years. As is almost guaranteed (punctures not-with-standing) Louise Croxson brought home the women’s title yet again… Will anyone ever be able to take her on in coming years?

Overall, the night was yet again a great evening of racing with club mates, followed by a visit to the local pub for doorstep sandwiches, drinks, prizes and general mickey taking!