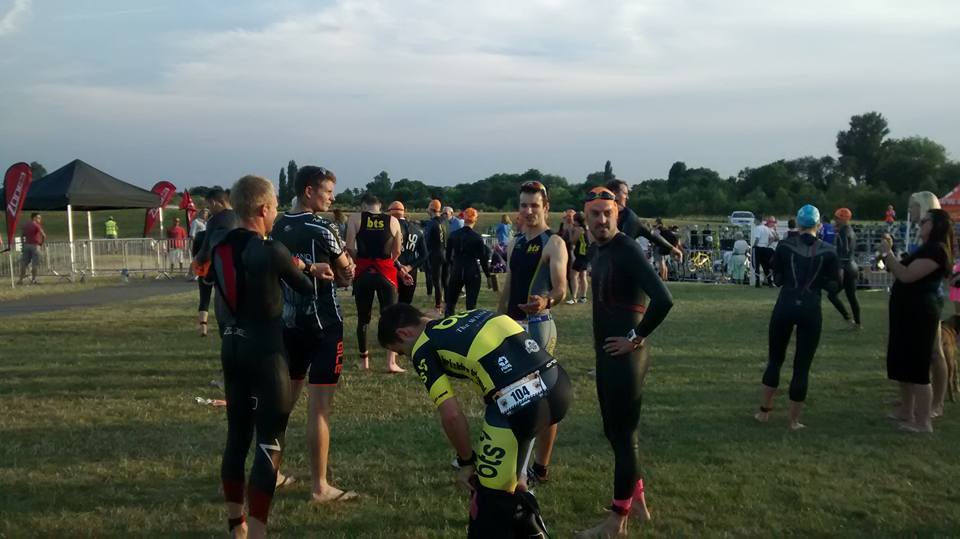 Gorgeous sunny – and really rather warm – weather greeted some 19 members of BTS, as well as 4 teams, on Wednesday 17th August.

As is now the norm, our friends at VoTwo Events put on special wave for us at 7.05pm so everyone could race head to head.

The early swim lead was taken by Luke Muir of Team Fuller, who was 5m clear of the field within 20m and went on to record a swim time nearly 1 minute ahead of Paul Fitzpatrick and Sam Pannell. Louise Croxson followed Christof DeBelder of Team Baylis somc 20s later to round out the swimmers under 12 minutes.

Once on the bike, Team Fuller maintained a large part of the lead, thanks to David (it’s not about the bike) Hough, flying along on his rather nice new Canyon SpeedMax. As expected though, bike leg of the evening went to Ed Nunn, who in a repeat of last year, made up the time lost to both Paul and Sam to exit T2 in pursuit of Steve Fuller. Behind Louise who had now been caught by Chris Dollimore, Kate Robinson left T2 with a decent advantage on Lynda Hart and Julia Hodkinson.

With Paul struggling to get up to pace on the run, the flying Sam Pannell came into his own and chased down Ed, having both passed Steve. A 17:16 5k was too much for anyone to live with but the finishing gap of only 9 seconds is the closest for a few years.

In the women’s race, Louise was well out in front right the way through, but Lynda ran down Kate for 2nd, who then held off Julia to take the final step on the podium.

In the relays, Steve Fuller couldn’t quite hold off a fast running Laura Baylis, who nipped past to take the Relay team victory.