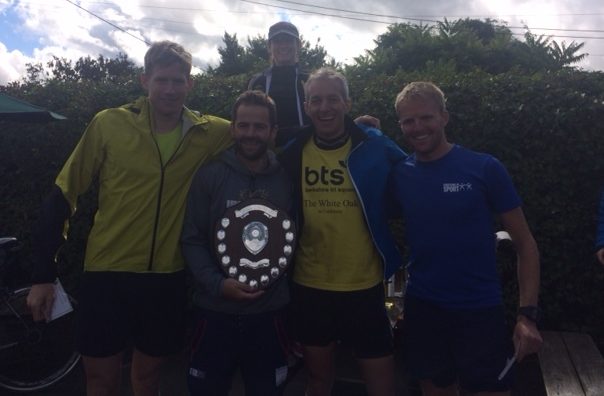 Saturday, the 1st of October saw the 9th Annual Captain’s Challenge, this year sponsored by Data Kraken, attract a record number of teams. Despite the less that favourable weather  and a few teams opting for their beds instead of braving the conditions, fourteen teams from five different clubs competed in five different divisions.

As usual, the race is a relay format that sees teams of four competitors each taking on one lap before handing off to the next competitor. Each team must complete a certain number of laps as decreed by Head Judge Howard Vine, but not all team members need do the same amount of laps. Never is there a better time than this event to be a weaker swimmer!  The early start at Bray Lake was cool but the water was warm. Despite the worsening fog which proved a challenge for some competitors (we really aren’t sure which direction Ladies’ Captain Gemma Korff swam off in) the leading teams in each division were not leading by much. The BTS Men’s team led the A division by a mere minute, with Tri 20 leading the Men’s B, Tri 20 leading the women out of the water and Farnham alone in the Mixed category with almost the fastest swim time of the day.

With swim legs over, the whole entourage then moved over to the White Hart pub for the bike and run legs. The usually hot bike leg was tempered with some sudden bursts of rain making for more cautious cycling from several teams. Throw in a giant tractor trimming the hedges on the bike course and the teams started to spread out on the leader board.

A quick transition to the run and those teams helping to judge the annual BTS Bake Off saw their well-timed sugar rushes kick in just in time for the 1 mile-ish run relay. The sun came out, things started to heat up and the compression socks were in full colour. Hillingdon pulled out some blistering times on the run but it wasn’t enough to catch the BTS Men who took the shield home for the first time in four years. The BTS women also benefited from strong bike and run legs to take the lead and hold on to another 1st place finish. And most importantly, with another record number of entries (and even the other clubs got into the mix), Andrea Taborelli’s tiramisu took home the BTS Bake Off trophy after a tie break taste test had him beating out Sara Handford’s caramel fudge brownies. With pints in hand for the award ceremony, Berkshire Tri Squad took no responsibility if competitors consumed more calories than they burned this year.