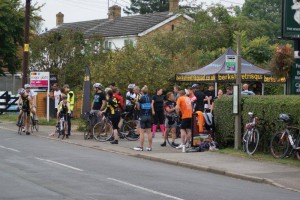 Sept 20th saw the annual BTS Captain’s Challenge relay event. The fun end of season inter- and intra-squad challenge drew some new teams this year from Reading and Ful-On tri. With the plethora of new BTS faces as well and some good weather it was a successful day out.

This year’s rankings were based on actual finishing times with the ever super secret handicapping weightings applying after each round. Despite being added a penalty lap for sandbagging the swim, Team Four Play emerged victorious. Overall results, and a great write up from the winning team below. A big thanks to everyone who volunteered and baked cakes and to our Great BTS Bake Off winner – Luke McCarthy

Full set of photos HERE, thanks to Kevin Spence for these.

Race Review from CARL BEETHAM of Team Four Play:
Berkshire Tri Squad’s Captain’s Challenge: a challenging yet socially & fun oriented team relay event where BTS and fellow tri clubs enter teams of four competitors and compete over the usual disciplines to varying distances dependent upon age, experience, gender & ability. Unsurprisingly, for stalwarts ‘Team Four-Play’ it was our first race of the triathlon season as none of us like to peak too early, and we were all keen to avoid injury prior to our arrival on the competitive scene. Probably.

Seven o’clock saw three of us wondering if our wet-suits still fitted as the last time they had been in the water was at last year’s race, but if we looked a tad nervous, it was nothing compared to new recruit, Richard Cumner, who was facing his first ever ‘wetsuit swim’ in his first ever open water swim, Uh oh. Being Captain I did the decent thing (for once) and nominated him to go first! Nah, I went in and even though I was last out of the water I’d managed to hold onto the tail of the pack. That was when the fun started as I’d forgotten I can never stand up after swimming and stumbled around like the drunken fool I’m usually taken for. Transition was never my strong point. Subsequent swims, in the positively balmy water of Bray Lake, were all completed with aplomb, though it has to be said that we were neither pretty nor quick, and most other teams were dried-off and hitting the croissants by the time Mike Warner finished off the final of our allotted nine 350m loops.

In the manner of a boxing-match referee stepping-in and stopping the fight before any permanent damage is done, race-organiser Lynda Hart now understandably relegated to us to the ‘mixed team’ level and deemed it necessary that we need complete only eight laps of the 5km cycle loop and eight of the 1.5km running lap. Aha, but little did she know that we had a plan of great cunning… Step forward Martin Pottage! Martin’s no swimmer but my, can he push a peddle. Having just returned from a couple of weeks hill-climbing in the Basque country, and completing last week’s tortuous Etape Cymru in sub-5, he was on-fire. Quickly realising the error of her ways, Lynda grudgingly accepted my ‘eight-loop team nutritional strategy’ plea but did quite rightly force another running lap on us. B*gger.

Secret weapon #2: You’re not going to believe this, but it turns out that our 57kg twenty-one year old new recruit can run 5km in under 18 minutes. Comfortably. And I didn’t know it. No, really. The run was great fun and even Mike, who has more metal-work in his legs than Barry Sheene (I kid you not) polished off his one loop more in the manner of Mister Sheen! And so we have one loop left to run and I find myself on the start/finish line with the two other final runners from the other two teams who could win it: Craig, I think from Ful-On Tri and one of the boys from Reading Tri20. I’m off first as Ricardo gracefully sprints home, with Craig about 50m behind and the Reading Tri20 fellow a good 300-400m further back. Now, I know I can hold-off Craig as I’d followed him on an earlier lap and he and I are about the same pace, but the Tri20 guy is young, fit, strong and uber-competitive. As I round the last bend, with about 200m to go, his team-mates are yelling encouragement and I know he’s coming…but there just ain’t the distance and I hold him off, crossing the line to take the win for Team Four Play. Last year we were comfortably last placed and this year, first. Who’d a thunked it. As Lynda succinctly put it “if at first you don’t succeed, tri, tri, tri again!”

– BTS’s Captain’s Challenge is THE best race on the calendar, bar none. It’s fun, it’s free, its distances encourage a ‘balls-out’ sprint approach, they bake great cakes for you to scoff en-route, and they even give you a free beer afterwards. What’s not to love! Tell your friends, tell your family, tell people you’ve never met before to put next September in the diary.
– The greatest cheers were reserved for a wee young boy competing in his first ever event and it was truly inspiring to witness. He can’t even have been a teenager. No, he really can’t have been a teenager as the police turned up and took his parents away for obvious child abuse.
– 2014’s results were admittedly a ‘handicap travesty’ and the real winners were Reading Tri20 as they had only three members and completed way more laps than we did, in all disciplines. But hey-ho, who am I to argue!
– Rest assured we shall be back next year to defend our title but suspect Lynda may not prove to quite as generous. And I suspect our wet-suits will remain dry until that date.
– Apologies to anyone who was delayed by the Team Four Play open-top-bus cavalcade that took place around central Sunningdale earlier today. Even we were taken aback by the size of the crowds who turned out to celebrate our triumphant home-coming.
– Three cheers to BTS.