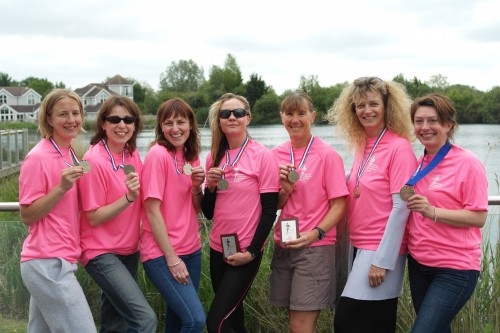 Heidi Fuller, Julia Hodkinson and Louise Croxson took first place in their categories over the Sprint (750m/20km/5km).  Louisa Seymour was placed second, and Vicki Hazel and Heather Martin completed the BTS swoop with strong performances. Heidi Fuller also won her AG in the Novice event (200m/20km/2.5km). Sharon Fox was team coach and photographer for the day.

In rather unseasonally cold, windy conditions, the BTS team took to the water likes graceful swans and ended up in pink!

True to form, Steve Fuller and Phil Hodkinson survived the conditions by offering their vocal support to the BTS team and participating in the early morning bacon butties/mugs of tea. – Well done to everyone!