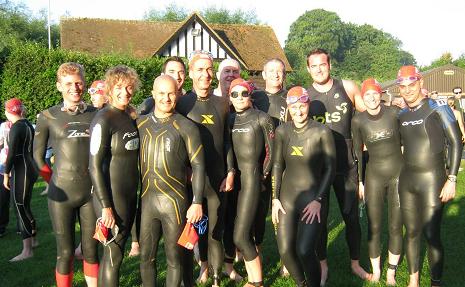 2 well attended events to update on this week, so will get the ‘lesser’ one out of the way first.

For about the 4th year in a row, John and Beth Booker led the trip down to the south coast to take part in Concept Sport’s Swanage Classic Triathlon. All in all, it’s a bit of a pain to get to, the hotels are expensive and expect you to stay two nights, the Swim is in the (choppy) sea, the Bike is undulating and – for the last 2 years at least – the Run involves a 400m climb up a hillside!

Despite this, 2012 saw the biggest contingent of BTS Members at the race for several years. With several doing the Classic (Olympic) distance, 1 (Gope Walker) doing the Sprint, and one team doing the Relay. Unfortunately the relay team of Jane Drapkin & Beth Booker were short of a runner, so after doing the slightly over-distance Sprint in a finishing time of  1h45m, Gope decided he liked the 400m climb that much he would go out again, so fair play. Classic Results below:

And so, to the main event of the post..

The BTS Club Championships 2012. This year 18 club members turned up take part in the race within a race, organised by F3 Events at new venue – Shiplake College near Henley.  Competing over the VERY short distance of 750m Swim, 14.5km Bike and ‘roughly 4km’ Run, the racing was bound to be fast and furious.

Another change this year was the absense of one Sam Gardner! The lack of our Xterra Pro, who has a habit of turning up with minutes to spare at Club Champs and then roundly thrashing everyone, meant the race was wide open for a new winner……. except for the fact that David Lightbourne was still there, so other than a spirited swim effort from Paul Fitzpatrick (Me), the race was probably a foregone conclusion.

Special mention should go to the following:

– David Lightbourne who not only won BTS race, but was only denied overall victory by poor marshalling.

– Louise Croxson who was first woman home overall, and only beaten by a few men

– Lynda Hart, who had a top 8 bike split, only being beaten by David within BTS

– Richard File, who once again showed that he is as good as they come in the ‘Super Vet’ category

– Lucinda Lyon, who completed her first ever Open Water Tri at this event. 🙂

Finally, one last mention for another member, Kate Sandford, who was 3rd placed Woman in the longer (1500m/42km/8km)  event in a time of 2 hours 29 mins

You can check out a few photos of the day, thanks to Chris Harris and Katy Walker here