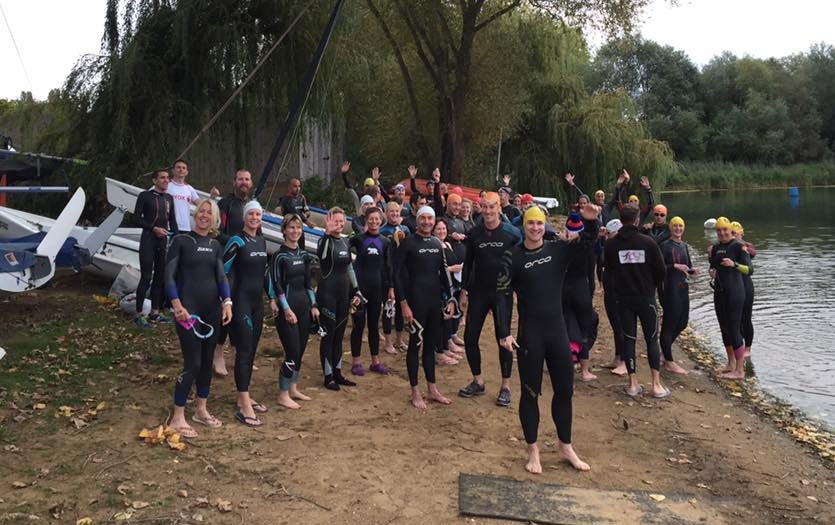 The relay event started with multiple laps of the swim course at Bray Lake, then in a change from tradition this year, the bike and run sections took part at the Jolly Gardner in Moneyrow Green. As always the event starts out with some semblance of order which quickly falls by the wayside once we find out who has been sand bagging the swim in order to get favourable adjustments on the bike.
Head referee Gemma had her hands full in the swim, but at least this year the swimmers were visible with no fog and she’ll remain the sole BTSer to have swam in the wrong direction at previous Challenges. Sorry Gemma!

For the first year in the history of the event, Hillingdon fielded a ladies team, who quickly took a commanding lead in the ladies competition, completing their designated swim laps well ahead of both the men’s and women’s field giving them a substantial lead heading into the bike leg. In hindsight, we should have thrown order out the window then and there and given them more laps

In the men’s race, Hillingdon again opened a narrow lead over HWCC (with a surprise Gope in the water for HWCC) and with BTS in a solid third place. Hot showers, a few plasters from the rocky beach and a round of coffees and croissants followed before we headed over to the Jolly Gardner. Our guest teams commented ‘how very civilised…’.

Keeping to tradition, we set the teams off on the bike at intervals based on their time gaps from the swim section. Well maybe not entirely their exact time gaps but using a complex and closely guarded mathematical formula the leaders in each division were off first followed by the chasing teams. The bike rolls right into the run keeping an F1 style finish to ensure the race was tight and we could all make it to the bar in good time.
The men’s A race continued to be a close race with the teams swapping the lead throughout the bike and run. Hats off to the BTS Men’s A team who made up some tremendous time on the bike only to be edged by HWCC going on to the run. Given that HWCC only managed three team members, there was no room for error. Excitingly, the BTS ladies managed to catch the Hillingdon ladies on the bikes thanks to Barbara’s mountain legs, only to lose the lead again during the run. Apart from the injuries on the swim, there weren’t too many dramas on the course this year, no tractors chopping hedges or slow-moving horses. Except of course for Gope’s exemplary demonstration of a standing start on the bike, HWCC Pablo’s limited awareness of his team mates positions on the course losing them valuable seconds (it turns out they didn’t need anyways) and we shouldn’t mention Ian Lee-
Emery’s extra bike lap, nor Chris Weeks randomly deciding to start his teams run leg in the middle of the
bike section. Possibly a few contenders for most embarrassing moment…

Alongside the race there was some serious competition in the BTS Bake Off -There was a fantastic spread, with other clubs kindly bringing their bakes to our not so gingham alter. Ed Nunn’s Mother-in-

Law won top prize and hopefully she is now warned that she’ll be baking a prize for the awards do raffle. Ah…. the price of fame

A huge thank you to our sponsor Bike Box online for the prize vouchers, Nicky Weeks for marshalling the run course, Club Chair and competitor Lynda Hart for sorting the briefing and awarding the prizes, Bray Lake and the Jolly Gardner, Moneyrow Green for hosting us, Ed Nunn and Gemma for superb organising and sign posting and to all the teams from BTS and our frenemies at Hillingdon, 3CT, Tri20, Xerox and HWCC for an enjoyable and well-run race.

Looking forward to next year already. Final positions as follows, with a few pics of the day too.