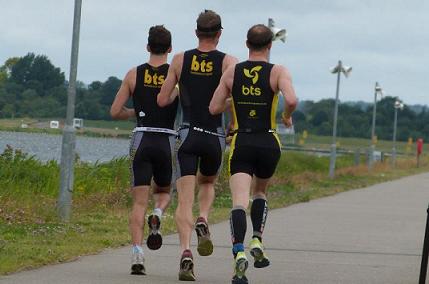 Thanks to Women’s Captain, Lynda Hart for the write-up.

Racing. What else brings shivers of goosebumps, nervousness about trying not to let your team down and a whole lot of trash talking? BananaMan – that’s what! In what continues to be a very strong tradition, BTS had a record number of teams registered for the BananaMan Team Time Trial and Relay events this year. Held on Saturday, July 5th, our streak of excellent summer weather came to a bit of an end with cooler temps, a bit of rain and the usual ‘fun’ headwind on Dorney Lake.

The captains and race helpers always have a tough job trying to put teams together in order to ensure some competition and also a good time to be had by all. This year didn’t disappoint with three teams finishing within one minute of each other.

Second out of the water, Christophe De Belder, substituting for an unwell Richard File,  set the tone for a plethora of solid BTS swimmers. He was closely followed by Paul Fitzpatrick,  Louise Croxson and David Lightbourne. Unfortunately, they were all closely followed by a troop of Army men whose 2 teams lead out of transition to hold on to 1st and 2nd places throughout the whole race.

BTS put in a fantastic showing however, with BTS Five-O made up of Paul Fitzpatrick, David Lightbourne and Rob Baylis in hot pursuit. Trying to have a bit of fun while chasing the offending leaders, the boys in police gear were unable to close the gap and had to settle for a very respectable 3rd place. But their speedy chasing was not in vain as they were able to increase their lead over the overall 4th place team of BTS Iron Men. Ed Nunn, Martyn Parrish and Gope Walker put their long distance training on hold to put together the fastest team and BTS individual run of the day to finish just ahead of the ladies. BTS Super Chicks were just that on the day – super – as they won the overall ladies race and finished third out of the BTS race, having chicked a few other men’s team in the race. Louise Croxson, Kate McNeill and Laura Baylis enjoyed a tough race of trying to chase down the Iron Men and it paid off with a hamper from Lidl in the end. The Super Chicks were ever so closely followed by the Young Ones and Two Matt and a Guy. Christophe de Belder, Dan Brasier and David Hough narrowly defeated new members Matt Eckert, Matthew Whitehouse and perenially smiling, Guy Grewal.

The biggest news of the day came from the BTS Smilers as Ralph Moore answered the BananaMan call to arms and returned to racing after a 5 year hiatus. He was joined by Julia Hodkinson and Colin Surgeon to make sure he kept that grin on his face and was closely heckled by Angela Gregory, Janice Caldwell and Michelle who were hot on their heels.

In the relay category, Paul Mason put in a monster bike ride to take first place among the BTS group. His team of Philip Mason and Neil Potter finished a meer minute ahead of Ian Weatherall, Mat Whittingham and Steve Fuller. While Ian also put in a fantastic ride, the Mason boy’s lead was just too much to surmont. Luckily, they did finish in front of the first BTS ladies team of Christina Poulton, Jo Weatherall and Lynda Hart so in the end, were happy to not be chicked. Not three minutes later, Captain Kevin Spence’s team finished the race in a solid fourth place BTS finish. A big thanks to Kevin who did the run leg of the relay so teammates Will Pimm and Rob Dare were able to compete.

The biggest race of the day came down to one of our new relay teams however. With just 3 seconds dividing them, 3 seconds! The Weeks family (look out Mason’s and Jackson’s!) were narrowly edged out by Joanne, Heather and Barbara. Chris, Nicky and Hayley Weeks put in a tough run to try and catch them up but it wasn’t too be. And lastly, it was a close race between Vicky, Sharon and Katy against a keen masters team of Chris, Phil and John. Oh so close!

Thanks again to all the team captains and for everyone for coming out on the day. For those of you who haven’t collected your prizes, please see your team captain to see if you have won.