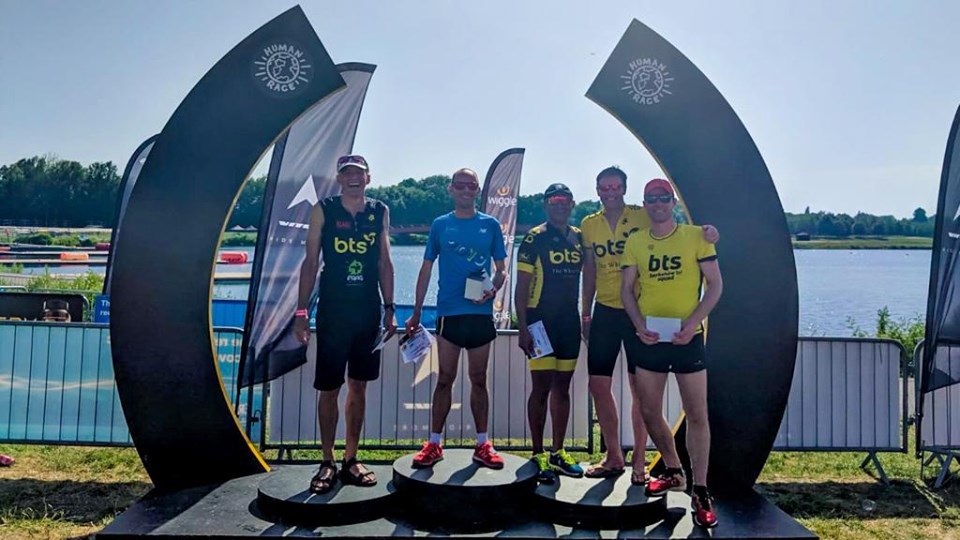 Saturday brought the hottest day of the year and the hottest event (so far) of the BTS racing calendar. Banana Triathlon (formally Bananaman).

BTS minis started the day, with many tackling the Scootathalon. Next up was Alex Titley in the Banana Split race with a podium topping performance in his age group- huge congratulations Alex.

Human Race had removed our favourite Team Time Trial option, whereas a team of three, you all do each discipline together then regroup in transition if necessary. Rather than tackling the Olympic or sprint triathlons solo, which was on offer, we decided to have a fun day out and a bit of a social as a club. A few weeks of team juggling, name deciding and picnic planning preceded the event and on the day it all came together perfectly.

The ‘Bunch of Bananas’ relay started at 13:30 while the mercury starts creeping up towards 34’c and our swimmers sped through the water to kick our 9 relay teams into action.

Next up our intrepid cyclists hit the tarmac, enjoying the cooling breeze as they sped around the lake, as a spectator it was a thrilling view with the places between our teams chopping and changing every lap. Who would be into transition first?

Swimmers loved ones, furry friends and kiddies got the picnic started were a surprising extra competition started… the carrot – cake – off!

Black and Yellow took over the relay transition area, with our runners trying to not get overheated before the run started. Unfortunately, one very speedy Datchet Dasher was waiting in transition too, but all was not lost, we had many speedsters too… and we were here for the fun… honest.

Our Cyclists joined the Gazebo crew, were Erdinger and speciality imported Rose wine was opened and the runners headed out straight past the gazebo. 3 laps for each runner. Human Race had prepared for the heat and put on sprinklers halfway up the run route which was a blessed relief. Stephanie set out at ‘don’t faint pace’ with Martyn and Andrew taking a chatty pace to make their run a training run for their upcoming IronMan. As a team event, each runner was joined by their two other team members to cross the finish line, with sneaky Team Green Team taking advantage of Top Bananas loyalty to each other to gain a second advantage in the finish funnel. There’s sportsmanship for you 😛

We all retired with Alcohol Frei Erdinger for a sit down in our gazebo before the awards ceremony. Our two men’s teams took second and third place on the podium hurrah! We’ll never know if our ladies won as Human Race decided to not award any female prizes… it was Bananaman after all. A huge thank you to our supporters, team members and picnic providers. It was fantastic to see faces old and new, with special guest appearances from Gope, Dick, Luke (and Helen) and Team Bayliss.

While we were all recovering on Sunday, or refreshing the results page after hitting the lake. Kate Robinson, Paul Fitzpatrick and David Green were over at Leeds Castle Triathlon (which is not in Leeds), securing qualifying spots for the World Champs in Edmonton 2020, with Kate also winning her Age Group.

I think we can say it was a good weekend in the office for Berkshire Tri Squad. See you at training team. Results from Banana Triathlon are as follows.