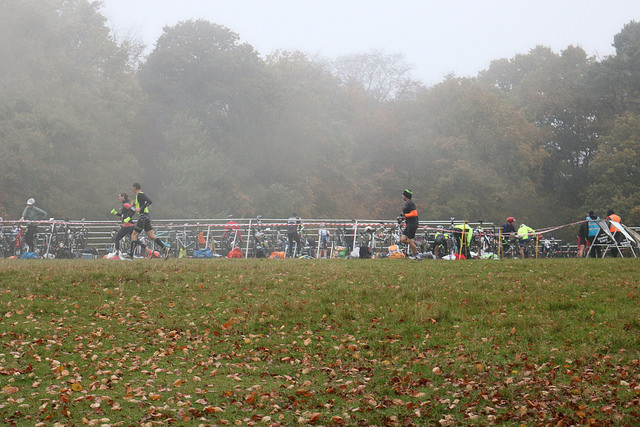 The second large training group this year focused on the Winter Ballbuster duathlon from Human Race, with a group of 13 members following a plan specifically geared towards this very hilly and long event. With a marked increase in running and cycling volume and a drop in swimming it took a few members a little while to adjust, particularly as the training took a polarised approach, this means spending 80% of time below their aerobic threshold and then 20% basically going as fast and as hard as they physically could, feedback was that people enjoyed the easier bits but the hard bits were tough!

Over the course of training a couple of people were lost to injury and club ‘rain god’, Gemma Korff,  nursed shin splints from the mid-point of training, so was taking a very careful approach to the race, focusing on finishing in one piece rather than racing flat out. However, everyone plugged away trying to get as many ‘greens’ (correctly completed Training Peaks sessions) as possible, knowing that Coach Ed was pouring over every work out and pulling them up when they skipped sessions or missed rest days.

Fast forward to race day, the weather forecasts swung from atrocious to terrible over the course of the previous week, so waking up to a dry and mild morning got everyone’s hopes up but during registration there was a sharp drop in temperatures to around 4 degrees.

BTS tried their best to set off in the same wave, to ensure a race rather than a time trial, and off they all went across slippery ground and freezing fog and onto the road for 13 wintery kilometres. The first run at the Ballbuster is all about pacing yourself, so everyone set off at their own pace, with Paul shooting off into the distance and leaving everyone in his dust. the first part of the course is gradually uphill before about 9km of gradual descent before the climb of box hill start 3km out, pacing was still the name of the game but the sessions pounding up and down “that hill” had clearly done their work, with everyone going faster than last year despite the course being 500m longer!

Onto the bike, and this is where the race really starts, with the stronger cyclists trying to put time into the runners and the stronger runners trying to limit their losses. Conditions continued to be pretty grim, now with added wind chill, and the strong winds having blown fresh leaves off of the trees to make conditions nerve-wracking if not quite treacherous. Three laps ascending box hill on each lap was a test of nerve, strength and resilience. Chris had put in a stormer of a bike split here hoping to put time into Andrea ahead of the second run, in what was billed as a battle of the “most improved 40-44 year old men” ahead of the awards do on Saturday night. Thankfully everyone avoided the punctures and crashes of previous years.

Off of the bike and T2 claimed its first casualty from the club, Paul had paced himself excellently on the bike ready to unleash on the run, unfortunately the cold had got the better of him and after 6 minutes of trying to get his helmet undone and shoes off and he took the wise decision to pull out and find some warm clothes rather than risk hypothermia. Having caught Paul on the climb of Box Hill on Lap 1, Ed was leading the club at this stage after his customary strong bike leg, but was quickly overtaken by two of the relay teams who would go on to finish 3rd and 4th relay overall, despite both teams only having 2 members rather than the usual 3! From here onward Ed was running scared, not knowing the Paul had stopped which he would only find out meters from the finish line! Andrea and Chris’s battle continued onto the run, but with Andrea catching and passing Chris after about 1 km it was all over before it had really begun. Lynda had stormed to the fastest women’s bike split and had closed the gap on a fast fading debutant Jean-Christophe. Next up were the most consistent performers of the day, both having paced themselves perfectly to this point, Andrew Bower slowing down slightly on the second run, but far less than anyone else other than the hard charging Kate Robinson who unfortunately ran out of road and could have done with the run being another couple of miles! Completing the group was Ladies Captain Gemma clearly in considerable pain, having shown true grit to get through both the conditions and the shin splints, ready for a few recovery drinks later on!

A few image from the day, taken from the album of Colin Mitchell (mitchcolin88) on flickr – Thanks. 🙂 (click image to view)