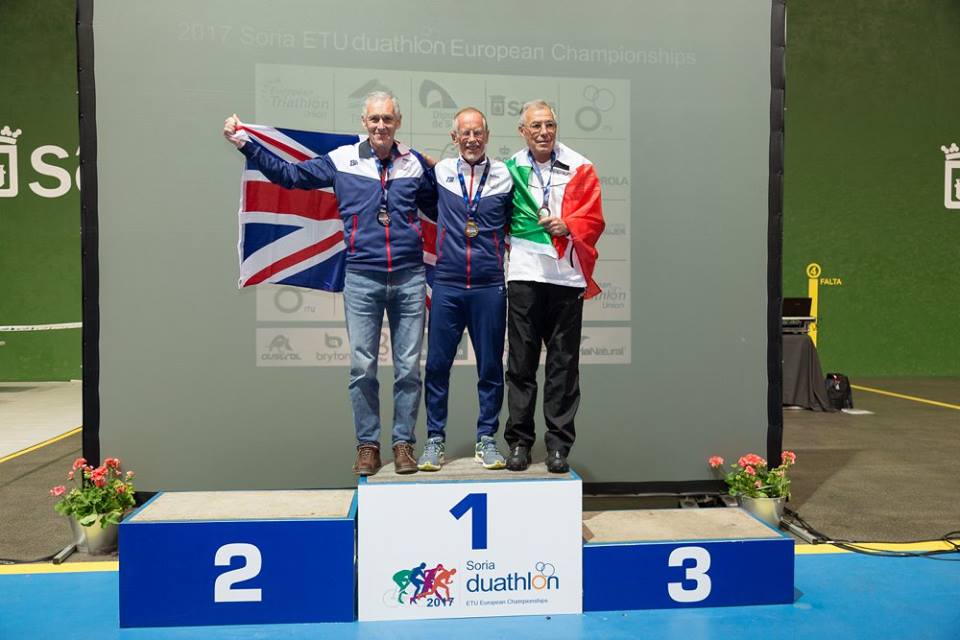 There can only be one lead story for the round up of April results.

For newer members of the club, Richard (Dick) File will not be a name you might know – mainly because he lives in Spain for half the year! However, your humble website editor and a least a couple of others would love to be half as good as he is when the time comes – racing at 70-74 Age Group!

Dick is always the master of the understatement, playing down every performance, so I will let him fill you in on his European AG win at the ETU Duathlon Champs in Soria on 30th April.

Hi Paul, managed a decent win after a longish gap. ETU Duathlon championships in Soria, Spain. Won the gold in the M70-74 standard distance. Wore GB kit of course. Very testing, windy, showery conditions for the standard race. And being 3600 feet above sea level meant that there was less oxygen, which I think was a competitive advantage for me. Only 5 finished, and people were dropping out right up to race day.

Just for info, my targets for the triathlon season are the ETU Middle Distance champs in Herning, Denmark on 11 June and ETU Long Distance Champs in Almere, Netherlands on 9 Sept, plus of course the Club Champs. Regards, Richard/Dick File

You can also look out for Dick at Bananaman this year – get your names down! 🙂

In the more unusual discipline of an AquaBike (with a short run afterwards just to confuse things) Jon Elliot and Kevin Spence both achieved 2nd in their Age Group at the Oldbury Sprint (400m pool swim, 20km Bike, 300m run)

With nothing else to report in April (and a lot coming in May), Hart Triathlon is included below as so many BTS took part over the new course.

Even the pool was new this year, thanks to a shiny new Leisure Centre built over the road from the old one. This was followed by a pretty fast and largely flat 19.5km single lap bike course looping through the countryside. Finishing off, the 5.6km run took competitors around some local residential streets (with rather too many road crossings required)

The swim was seeded with people going off from 9am in an 8 lane pool to complete their 400m, until the fastest swimmers had finally got out on to the road by about 11.30am.