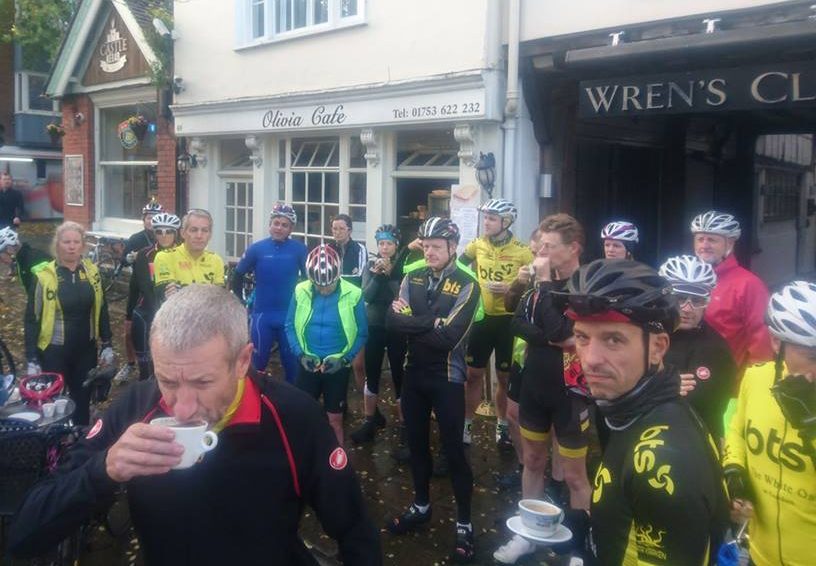 As the end of the year approaches, BTS tries to get one last big ride out of as many people in the club as possible, with its traditional Tour De Caffeine. As the name suggests, this is NOT a ride for someone who doesn’t like to stop and drink coffee (and maybe eat cake) during a long ride.

With 3-4 rides all going in similar directions, and at least 3 coffee stops (including one before we even start), it is chance to really get to know your fellow clubmates, swap rides half way around and generally rib each other over who did what and when whilst winning prizes for whatever random category the Tour organisers decide on, with plenty of pairs of cycling socks and cheap slogan t-shirts to be claimed.

All in all a day of (usually chilly) but very social riding. Summed up by Derek McCarthy below on his first TdC experience.

“I have doing triathlon for over 20 years, riding a bike (properly) for 40, and had a brief spell as a runner in the early 80’s.  During this time, as you would expect, I have been in many clubs with degrees varying of hospitality… This year I did my tour de caffeine, I think I won as I got a prize and why else would you get something yellow in a grand tour?  Seriously what a brilliant idea, I even turned up in non matching kit and wasn’t cast out.  It was a great day and thanks to everyone for being so welcoming.”

A few snaps of various people before they set out on their coffee based odyssey.