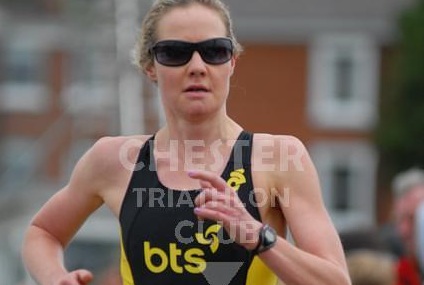 Not content with simply winning the women’s race at the BTS Club Champs last October, Louise Croxson decided that this year would be the year to ‘see how good I could be if I really went for it’ So, over the winter, she put in the miles, training twice a day – and despite crashing (more on this later) and managing to gauge a hole in her elbow, but miss her face completely (again, more later)  – started to really push on the swim especially.

Louise also brought in a nutritionist and followed every recipe, resulting in her slimming down and toning up. All with the intention of making to Auckland, and the World Triathlon Championships for the Olympic Distance.

With 3 chances to qualify, and normally the top 4 at each event being selected – plus some lucky losers who sneak in via the roll-down process – Louise was all set to take on race one at Dambuster in Mid-June.

Then disaster struck, only 8 weeks before the race, whilst out on ride with a few BTS members, Louise had a major crash – AGAIN, this time managing to break her jaw and put her out of action for several weeks. However, after getting back on the horse (I mean bike!) Louise went on  finish 3rd in her age group, and so win her place comfortably.

However, she wasn’t finished there and here is where Louise picks up the story with a report on race 2:

On the 1st of July,  I raced at my second World ITU qualifier, Deva triathlon at Chester. I was hoping for warmer and less windy conditions than Dambuster two weeks prior

But no such luck – it rained for the whole bike leg!

The swim was good and I was 9th out of the water after a super quick 1500m of 18.59 massively helped by the downstream current!

T1 was solid but the bike leg was very slow for me. I’m still very nervous on the bike especially in the wet conditions and see potential accidents happening everywhere! Loads of girls cycled pass me but I m sure they didn’t smash their face up 2 months ago. So I told myself don’t worry about it the confidence will come back just stay on the bike and finish it, don’t worry about how slow it is. Fellow BTS member Kate Sandford said to me as she tried to pass me on the bike,  “Louise this isn’t an leisurely ride you know” ….sorry Kate that fired me up a bit and I had to overtake you 😉

So 1 hour 18 minutes later I was finally off the bike and running….fast and feeling good. I pass most of the girls that overtook me on the bike and squeezed out the fastest female run of the day, 40.44 to win my age group and come 9th overall. This means I have more than comfortably earned my place in the squad in October

I was very happy with the result and it just shows that the race isn’t over until you cross the line and maybe if I pushed the bike leg then I won’t have been able to run as fast. I definitely think the weight loss (a side effect of breaking your jaw and smashing 8 teeth) has helped me get quicker on the run….every cloud has a silver lining, but wouldn’t be the way I would recommend going about improving your run!!