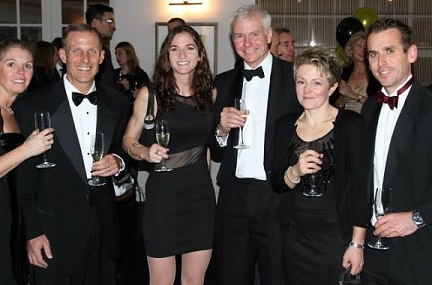 “The 2013 BTS awards night was one that truly represented what the club stood for. Well attended as ever both in so far as new members and old and a number of awards going to those in their first or second season of racing or to those who had shown considerable improvement since becoming part of the club.Under the well planned direction of Lynda and watchful eye of the Social Butterflies Janice and Louise the awards were distributed throughout an excellent dinner and concluded timely to set the stage for one on the most enjoyable live auctions in years courtesy of Luke Muir who warmed to his task quickly and soon had guests selling organs, kids and bikes to raise funds to increase their bids!The tables soon disappeared and the path was cleared for club members to show their season long acquired fitness on the dancefloor busting moves to the fantastic band – note to reader:FACT – Auctioneer extraordinaire Luke Muir was the original 6th member of this band who parted company before their success to pursue other careers!!A great and successful night and a huge thank you as always to those that donated their time and effort to making it happen which I have no doubt was appreciated by all. A fitting end to another successful BTS season.