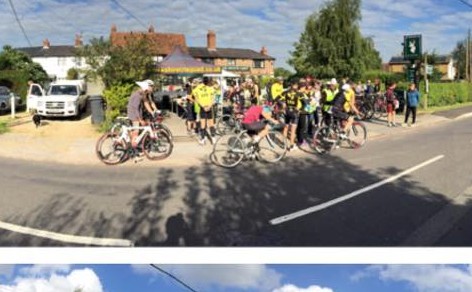 Last weekend saw the 11th edition of the club’s final tri event of the year, the BTS Captain’s Challenge; a team relay triathlon between BTS teams and local guest  clubs.

This year was the biggest turn out for several years with 14 teams taking part in male, female and mixed team categories. We’re sure a few people wondered what they’d let themselves in for when they arrived atBray Lake at 7am with an air temperature of 5 degrees and mist rising from the lake!

However once racing got underway and with tea, coffee and croissants readily available it looked set to be another brilliant day.

THE CAPTAINS’ CHALLENGE: The format (for the uninitiated) is as follows:

A team of 4 has to complete a number of relay legs , with the actual number each team has to complete being different depending the team’s speed designation (A Team vs B Team, Male vs Female etc) Every team member must do at least one leg of each of the 3 sports (300m Swims, 6k Rides, 2k Runs), but teams can opt to have certain members do extra turns if they have a good swimmer for example, saving a weaker swimmer for the run

Following the swim leg, racing moved to a local pub for the bike and run legs. By then the sun was shining and cakes were abundant thanks to the annual the Great BTS Bake Off, which is probably taken more seriously than the actual racing!.

Competition soon notched up a gear with BTS Men’s A and BTS Mixed Team 1 trying to chase down Hillingdon who had a sizeable lead after a successful swim. It wasn’t to be and it was Hillingdon who took home the Captain’s Challenge trophy. In the other divisions, results were as follows (your guess is a good as our’s on how it works out!)

Many thanks to all our volunteers for keeping the race going, marshalling the run leg and to all our bakers who took part in the club’s Bake Off – after mass tasting by racers and spectators alike, it was Kate Jewell’s Baklava that took the win!We’re already looking forward to next year’s edition!