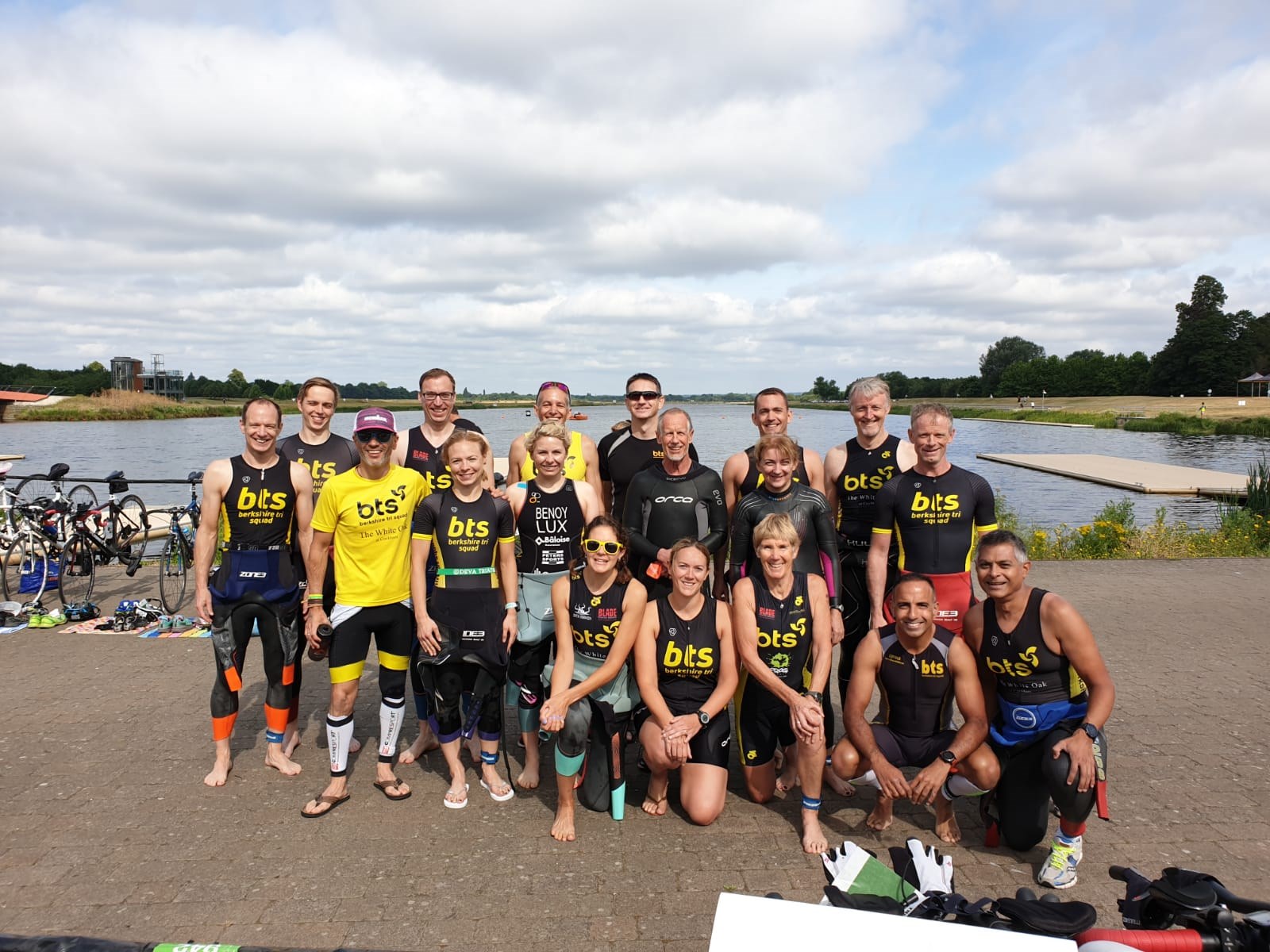 Your third and bumper edition of the newsletter. Firstly, a very warm BTS welcome to our new member Stephen Waterman; he is already a regular at the BTS sessions so do come and say hello!

We have had some fantastic racing taking place so far this summer. We have had several members competing at international level – and taking many podium spots – I hope you enjoy reading about some of their successes in this issue. Lots of members have raced closer to home, at Cotswolds, Leeds and in the Lake District to name a few. The Ironman Austria, Tallinn, Vichy and Copenhagen events have taken place.

BTS had a massive turnout at Windsor triathlon, 19 competing and a large cheer squad in the centre of town. It was a wet and windy day, but that didn’t dampen the spirits of the club; Stuart Boorman has shared his experience as a newcomer to the Windsor course.

In really exciting news, we are able to share in this edition the updates to our spin studio. We have purchased 6 interactive bikes, which you can read about in the article below. We had great fun in our first session taking part in team races and trying to get our cadence right! We hope to see you soon in the spin studio, either at the Wednesday club session, or at some of the special events that will be coming up soon.

We were also given an exciting opportunity from Pedal Sure. They gave the club two entries to Blenheim Triathlon (which Mark Williams and Phil Fazackerley won in the club ballot). They have also offered to give all BTS members a discount for their insurance. Thank you Pedal Sure!

Just a reminder that all members have a kit voucher following the payment of subs – please do speak to Steph if you would like any kit at a discounted rate. Perhaps a BTS bobble hat for when the colder weather creeps in?

We are also trying to encourage all members to purchase some form of ICE id. Many of you may have a parkrun wristband you can wear when you are out training, but if not, Andrea has managed to secure a discount, see your email for details.

There is still so much coming up for the club: Team Time Trial event with F3 at Dorney, Captain’s Challenge, end of season Dorney series and the Ballbuster duathlon. Don’t forget to send all your race results to Andrea via the form he sent out, in preparation for the Awards Banquet on the 16th November.

Well done BTS – what a season so far. I wish I could mention what every single member has done, but hopefully the newsletter gives a highlight about what the club has achieved. Please do keep your reports coming in to me as I love reading them and sharing them with the club. Happy racing and training – hope to see more of you soon at some of the upcoming events.

I am pleased to introduce the updated spin studio for BTS. Following feedback from members earlier in the year, the committee agreed to update 6 of the older bikes in the studio to Keiser M3i studio bikes. These not only have a better feel, but also come fitted with computers that show cadence, watts and will connect heart rate monitors for those who want to see their suffering in numbers! In addition, this brand of bike also comes with its own set of phone apps to track your own progress, link bikes together for group and instructed sessions and also upload directly to Training Peaks. The older bikes have all been given a simple service to ensure that they don’t squeak (as some used to) and all now have working cadence monitors. The Wattbike has returned to the studio, it now sits among the rest of the bikes to be used on a regular basis within sessions.

Along with the new bikes we have also installed a projector and screen, which can be used with the instructor app to show group data, races and other session data. With the projector it is also possible to use video routes and downloaded ‘live road’ style sessions to mix up the winter indoor training.

For this season we plan to offer some one-off cycle improvement sessions, making use of the new equipment. There will be a plan for a range of sessions, designed to improve FTP (functional threshold power) and generally help members improve their strength on the bike. Keep an eye out for more details on how to sign up for sessions in you email inbox and on Facebook.

I was the last BTS member to start the Windsor Tri this year, with the Men’s 40-42 year old wave starting last. This was great in one sense, because it gave me an extra lie in! In another it was not so good because, unlike the earlier waves, it meant it rained for the FULL duration of my ride.

I started the swim closest to the middle of the river for the downstream leg to take full advantage of the current. Thanks for the tip whoever it was that told me to do that! Flew downstream with the Thames in flood from days of heavy rain. And then it was time to turn upstream. Oh dear!…Turned the buoy and was stopped in my tracks by a wall of current. Swallowed gallons of Thames water at this point and a coughing fit ensued. Slogged it through to the end of the swim.

Hit the bike to find it was raining! It was dry when I entered the water. Having come quite hard off my bike in the wet three weeks ago and hurting my shoulder I took a tactical decision to not use my newly fitted aero bars in the wet – I’m still not completely stable on them to be honest. Bike went well apart from two near death experiences. The first was when a rider in front of me accidentally dropped his water bottle right in front of my bike. Narrowly avoided it, otherwise it could have had me off. Another rider commented as I rode past, “He dropped a banana skin for you there huh.” The second hairy moment was when on a corner my front tyre skidded on a metal drain cover, nearly having me off a second time. Got away with that one. I’ll be watching out for them in future!

And then the run. In a word. Painful! I’d planned to run at a pace faster than I was able to manage, but my legs and lungs were having none of it. More BRICK sessions needed! The BTS cheer crew were immense, making me smile with their rib-cage rattling cheering and cowbells. Looked like you had a cheering competition going on with the EVO supporters opposite there guys! Goes without saying you won. However, it was very pleasing to get support from our local rivals too, many of whom shouted my name.

Finished on 2:40:56, knocking 20 minutes off my previous best. Very pleased. It’s all thanks to the BTS crew giving great support and advice at training.

To finish the day off there was some good banter on Facebook between Michael Lenton, Phil and myself. Michael beat Phil by just 8 seconds and he beat me by just 40. Apparently Phil would have won if he hadn’t stopped to high five every kid he passed. Not sure what my excuse is, but we’ve agreed a friendly rematch at the Club Champs! See you there for more BTS banter.

In the first week of July, BTS International Age Group athletes travelled to Transylvania to compete in the ETU Multisport event in Romania. Members took part in a variety of races and all achieved podium positions. If Berkshire Tri Squad was a country, the 3 golds and 1 bronze would put it in 11th position! Well done to all, amazing performances.

I had an amazing weekend racing in Holland. We had clear blue skies and sunshine throughout, even though it was a bit warm on the run. We swam in the clear, fresh water of the Blue Lake and then cycled on fast flat roads to finish with a very hot 10k run, 4 loops of Weert.

My race went better than expected with a very fast bike and run section. I had a battle to the finish line with my fellow age grouper. Unfortunately I lost out (forgot its your chipped ankle across the line, not your body, that counts) but both given the same time. I did get on the podium for the Bronze medal which was an unexpected result this year; I managed to finish in 2hr 49.03. My individual times were: 1500m Swim: 32.10 mins 40k bike: 1hr 13.23 mins 10k run: 56.47 min

Mark has had a really successful season coming 1st in his Age Group at the Cotswolds Lake 62 Olympic distance event, 2nd in Cardiff Olympic distance and 3rd in the Windsor Sprint Distance. He has now conquered a very hot Ironman Vichy. Here are some of his race highlights:

Thanks to Pedal Sure, I was given a place in Blenheim triathlon; it was a windy and warm day, with a great atmosphere. I had a bit of a dodgy swim and forgot about that 400m hill to T1 – unpleasant! I really enjoyed a fast bike in places but there were a lot of first-timers who weaved all around the thin cycle way meaning I was hard on the brakes on a number of occasions. I made it into T2 and found my way out quite quickly. I actually enjoyed the run too even though it was 5.8 km not 5… I was 8th in my category over the weekend so pretty happy all round. A huge thanks to Pedal Sure who gave BTS the place, and to the committee for giving me the place to race on behalf of the club.

I was pleased to get second in my age category at the Windsor sprint – thanks to the ‘Chief Frog’ at Frog Bikes for the place. I had a ridiculous 7 minute swim thanks to the current!

Cardiff Olympic saw me achieve third in my age category. The bike course had to be changed and shortened due to a ‘police incident’ on the course before the race started which made for a mad 30km 6-lap bike which had some very tight 180 degree turns and was very busy. It was a nice event overall though and I was particularly happy with my run.

I was excited to participate in the National Sprint Champs today – the first time I’ve done that in over 20 years and more than 100 races! Sporting my new BTS trisuit I completed an average swim, a decent bike and a rather hard run to finish in 1:17:49 placing 26th out of 43 in the 50-54 category, which seemed surprisingly competitive! A great race and unfortunately didn’t see our other representative, Louise there – I see she had some trouble with the bike course 🙁. I also now know what I need to work on to be more competitive – being everything, but especially running!

That’s all for now, more Ironman posts to follow soon.